Quiz
Materials
You need to login to view this content. Please Login. Not a Member? Join Us
Directions: Read the article and answer the questions that follow. 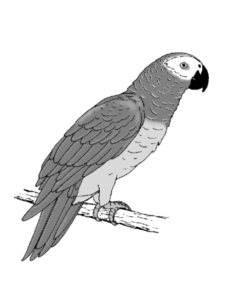 1 When people hear “Polly wants a cracker,” most imagine a parrot speaking. Parrots are well known for their ability to learn words or say simple sentences. In fact, that ability is one of the main reasons people like to have them as pets. Do parrots really know what they are saying though? Does Polly really want a cracker, or is she just making noise?

2 Until recently most scientists and animal experts believed that parrots were only good at mimicking sounds they heard. Many research scientists believe that talking birds repeat sounds that bring them praise or treats. Beyond this, they claim words probably have no meaning to parrots. If we say that someone is just “parroting the answer,” we mean that the person is repeating a memorized response without understanding it. The term “bird brain” is another example of a phrase that people use because they think that birds have limited mental abilities. Many think that a brain that is small in size cannot possess much intelligence or real language skills.

3 Other researchers are beginning to question this limited view of birds, particularly parrots. Dr. Irene Pepperberg is one of those researchers. In 1990 she published a research paper sharing the results of an exciting study. The study involved an African Grey parrot named Alex that seemed to communicate in a meaningful way. This study and Dr. Pepperberg’s continuing work with Alex have helped to change some people’s views about the mental abilities of parrots.

4 Dr. Pepperberg wanted to find out if parrots know what they are saying. She had read communication research on apes and dolphins. Some chimpanzees and gorillas can communicate with humans by using sign language. Dolphins can be taught to “talk” to people by pushing buttons labelled with symbols. Tests have shown that these animals know the meaning of what they are “saying.”

5 In 1977 Dr. Pepperberg bought Alex at a Chicago pet store. African Grey parrots are known as talented talkers. Some of them have been trained to use hundreds of words and phrases. Dr. Pepperberg wanted to see if Alex could be taught to speak meaningfully, so she and her assistant began to train him. Every time Alex repeated what they were saying, he was rewarded.

6 By 1997 Alex could name more than one hundred objects in Dr. Pepperberg’s laboratory. Alex could name various toys and favorite foods. He invented a word for his favorite treat, an apple slice, which he called a “banerry.”

7 Alex also recognized and named colours, numbers up to eight, materials, and shapes. In one test, Dr. Pepperberg showed him a wooden triangle and asked, “What shape is the wood?”

8 Alex replied, “Three corner.” As a reward, Alex was allowed to play with the block. In another test, the researchers showed Alex a tray holding several triangular blocks of different colours. The researchers then asked Alex to say what all of the blocks had in common.

9 The bird replied, “Shape.” He could also tell which block was the largest or smallest. When Alex became tired of working, he would say, “Go away!”

10 “All of the tests we’ve done with dolphins and apes to investigate their intelligence, we’ve done with Alex,” Dr. Pepperberg said in a 1997 interview. “He scored as well as they did in many of them, better in some.”

11 In 1997 Dr. Pepperberg and her assistants also began teaching Alex to recognize letters and to say their sounds. Alex might even learn to read! Whether or not he does, Alex is a very special bird.

12 Some critics say that the studies should not be taken seriously. They think that Alex is much more intelligent than other parrots or that he just has an excellent trainer. However, Dr. Pepperberg and other scientists do believe that Alex’s abilities show that parrots’ intelligence is similar to that of dolphins and apes.

You have already completed the quiz before. Hence you can not start it again.

You must first complete the following:

Quiz complete. Results are being recorded.

This site uses cookies. By continuing to browse the site, you are agreeing to our use of cookies.

We may request cookies to be set on your device. We use cookies to let us know when you visit our websites, how you interact with us, to enrich your user experience, and to customize your relationship with our website.

Click on the different category headings to find out more. You can also change some of your preferences. Note that blocking some types of cookies may impact your experience on our websites and the services we are able to offer.

These cookies are strictly necessary to provide you with services available through our website and to use some of its features.

Because these cookies are strictly necessary to deliver the website, refuseing them will have impact how our site functions. You always can block or delete cookies by changing your browser settings and force blocking all cookies on this website. But this will always prompt you to accept/refuse cookies when revisiting our site.

We fully respect if you want to refuse cookies but to avoid asking you again and again kindly allow us to store a cookie for that. You are free to opt out any time or opt in for other cookies to get a better experience. If you refuse cookies we will remove all set cookies in our domain.

We provide you with a list of stored cookies on your computer in our domain so you can check what we stored. Due to security reasons we are not able to show or modify cookies from other domains. You can check these in your browser security settings.

We also use different external services like Google Webfonts, Google Maps, and external Video providers. Since these providers may collect personal data like your IP address we allow you to block them here. Please be aware that this might heavily reduce the functionality and appearance of our site. Changes will take effect once you reload the page.